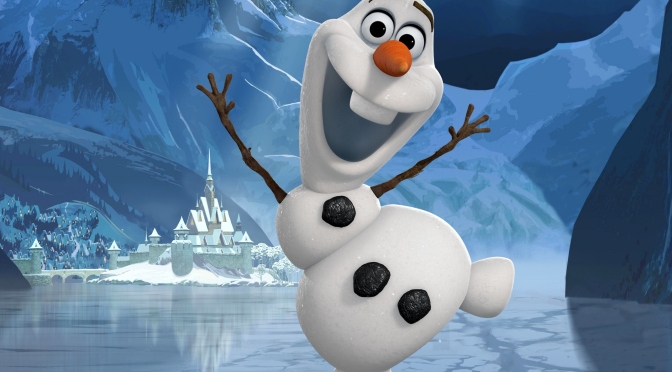 Only recently, I had this strange desire to marry Olaf. The Frozen fever had caught up to me and my room was filled with posters of Olaf. The wallpapers of my phone, that once had  Joey Graceffa in them, had been replaced by the cutest (read:weirdest) photos of the snowman and his .gif files occupied half of the memory space on my phone.

No one in my family was bothered, until I told them that I’d buy a gown that had a picture of Olaf in it. My mum almost fainted as the vague image of the fashion disaster flashed in her mind. My dad, who is the cool person in the family, decided to join me while I was watching the movie for the eighth time!

Of course, he didn’t like Olaf! Instead, he told that he liked the movie a lot. I wanted him to like Olaf.

Weeks together, I went around chanting Olaf’s quotes.

Hi there! I’m Olaf and I like warm hugs!

Some people are worth melting for!

In case, you are unaware of this snowman who likes summer, and has gotten articles and Facebook pages all over the internet, Olaf is by far, the friendliest snowman to walk the mountains above Arendelle. Goofy and naive and whimsical coupled with an extremely charming personality, he is probably the hero of the movie, unless you think otherwise.

So, I was driven to depths of delusional fervour and in a moment of excitement and giddy happiness, I decided that I was going to marry Olaf!

And that caused my entire family to fall off their chairs and roll on the ground, laughing their heads off (not literally, though). Of course, they thought that I had been joking, but I was perfectly serious. If there was a person I was going to marry, it was the snowman who liked summer.

Only, last night, I had been talking to my friend about my wedding plans, when he asked me whether it was a good idea to marry Olaf!

“But is love always enough?”

He had an impressive point, but I wasn’t ready to listen to anything.

“He’ll be the best life partner anybody could ever have!” I argued.

“How? For all you know, he might melt under the tropic sun!”

“The tropic sun! For God’s sake, it might even melt the entire North Pole in a day!”

Minutes later, the little fan-girl inside me had evaporated and we sat, discussing about ten reasons why Olaf wouldn’t be an ideal life partner.

And here they are –

Someone had rightly said, sometimes, love might not be enough.

Follow A CAFFEINATED BLOG on WordPress.com
Join 1,527 other followers