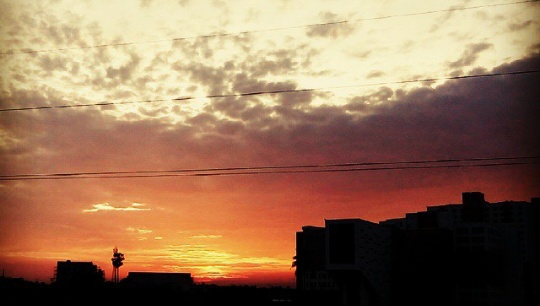 ..pulling her hand, to the tune of the rustling autumn breeze, he runs to the crooked, little wooden bench and they both sit. smelling the enticing taste of roasted apples that waltz past them. he almost says it, almost. the words are right at the tip. and almost out there. slowly slipping off the edge. staying a while. threatening to spill.

she tugs at his shirt and his eyes burn into hers as she looks up at him. her dark pupils gleam with curiosity as he studies her, gulping, lingering a while and slowly breathing out.

as the noises come closer, his breaths become more frantic. he pushes past the words threatening to flow out, dreams glistening in his radiant blue eyes that never fail to amaze her. they hold a sincerity, so profound that she can feel herself live the stories that his eyes hold.

“that’s all you wanted to tell me?” she mumbles, her eyes holding hope. she tastes hope. and anxiety. and fear. sweet and sour and a million things more.

and he almost says it, but doesn’t.

isn’t there more? she wants to ask almost. but, doesn’t.

and he turns away and looks at the sun. purple and orange and darker tones. and she looks away and watches the sunset too. a sunset of a million hopes and the one story she was almost sure of. almost.